The song of cicadas can be sensed in the cuisine. You are here, at the Auberge de la Croisade. A green haven with a breathtaking vista, over the Canal du Midi, of the valley of the river Aude, as far as the Pyrenees. A truly exceptional place. As you arrive, even from a distance you will recognise the welcoming and melodious accent of Bruno Plana, the founder. The creator. After spells in London (at Claridge’s) and Paris (the Hôtel Bristol), Bruno returned to the region of his birth. He opened the Auberge de la Croisade in 1993. It is ideally placed, barely 15 minutes from Narbonne and Béziers. An abandoned building as old as the Canal itself, a former staging post for horses that towed the canal barges, transformed into a chic restaurant.

Now it is Bruno who steers the ship accompanied from now on by his associate and Head Chef, Laurent Hund. Laurent is also a child of the Auberge. His personal take on Mediterranean cuisine evolves through the seasons, as do the wines from local producers in Saint-Chinian, the Minervois and the Corbières … The Canal du Midi remains the common theme. With its waters at your feet, in the shade of the mulberry plane trees, or inside the restaurant with its cosy decor, you will drift along on a current of happiness. At a crossroads, in keeping with Bruno, who hails from Narbonne, and with Laurent who’s from Béziers. A crossroads – of gastronomy. 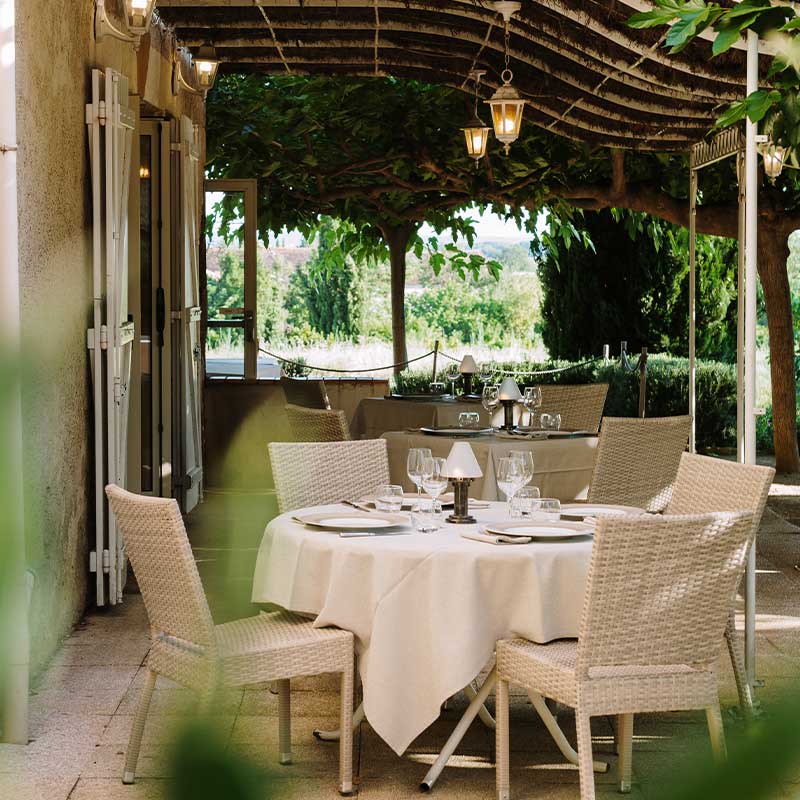 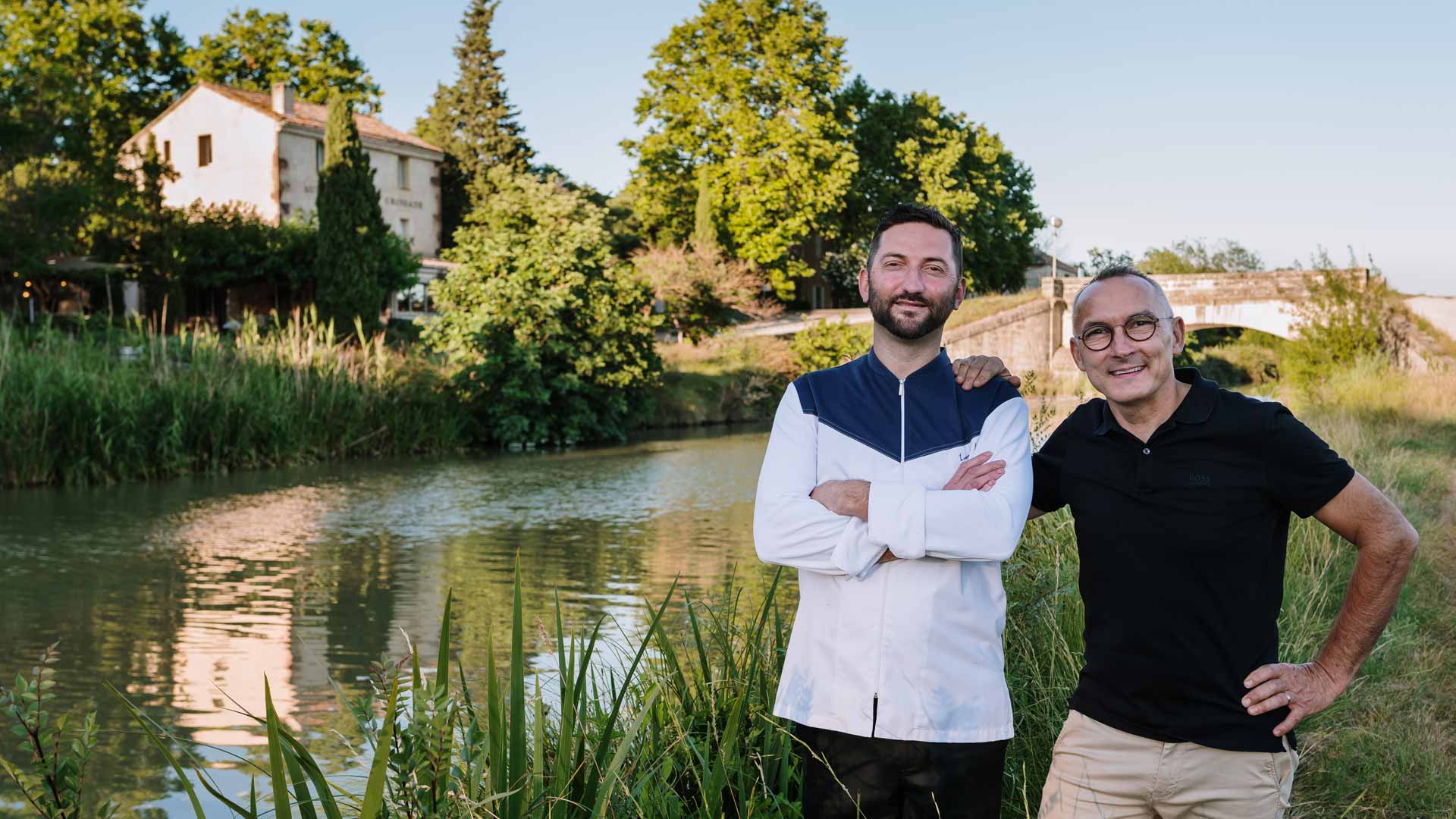 The Auberge de la Croisade is ideally situated, at the intersection of the roads of the Aude and the Hérault departments – the Minervoise, and the road leading from the Tarn to the Mediterranean. Just after Ouveillan, just before Cruzy, this secluded restaurant, situated in a green haven beside the Canal du Midi, is 15 minutes from Narbonne and Béziers. But that is not all. You can also reach the Auberge by bicycle (1 hour from Le Somail and Capestang) and by boat (1h30 from Le Somail and Capestang) following the waterway and… the tempting aromas coming from the kitchen.

On the banks of the Canal du Midi 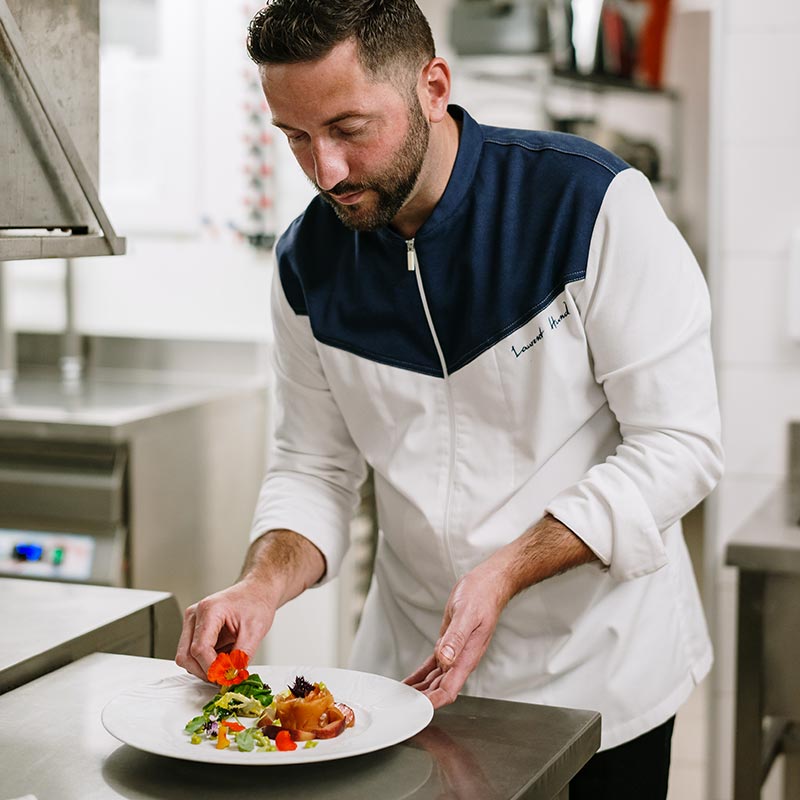 The Chef, Laurent Hund, learned the ropes at the Auberge de la Croisade when he was 16. This gave him time to develop a passion for a style of cooking he loves, both ample and full of flavours. He spread his wings and finally took flight to Annecy and the Imperial Palace. A few years later he moved to the Métropole Palace in Monaco then the Château de la Chèvre d’Or, with its two Michelin stars, an unmissable address on the Côte d’Azur.

Laurent has also worked his saucepan magic at the Puck in Megève, as a chef in a brasserie in the centre of the village, but also on cruise ships. Then a freshwater journey brought him to the waters of the Canal du Midi, “a spot that suits me down to the ground” explains the Chef who returned in April 2010 to the restaurant which was the original source of his inspiration.

Mediterranean and personalized cuisine that changes with the seasons, as well as wines from producers in Saint-Chinian, Minervois, Corbières …
The Canal du Midi remains the common thread.

For more news and informations see our Facebook page

Wear the mask to access your table and for any movement in the dining room and the terrace.
Wash your hands with hydro-alcoholic gel available
Before and after reading the menus.
Before and after access to the Toilets.
Keep 1.50m distance between each person.
Thank you for your understanding.